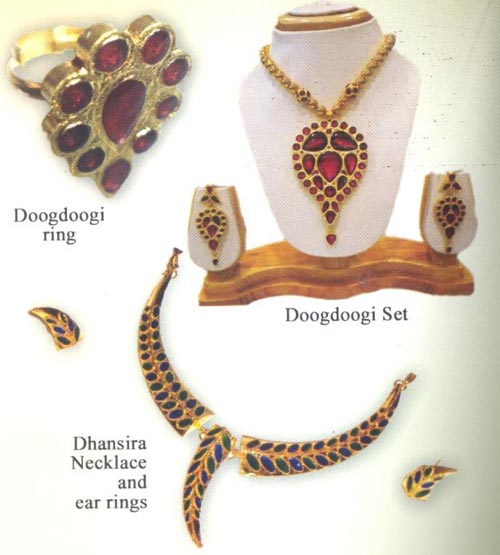 The state Assam rich in the tradition of manufacturing gold jewellery dates back to several centuries. The jewellery is typically hand-made, and the designs mostly depict floral and fauna treasures of the region. Traditional designs of Assamese jewelleries are simple but decorated with vibrant red gemstone, ruby or mina. Black, red and green colors on gold jewelries are looking very gorgeous and these colors also dominate the traditional dresses of tribes and communities of the northeastern states. Assamese ornaments are one of the most important parts of Assamese culture. It is generally made by pure gold. From the historical point of view this gold was locally available flowing down with the water of several Himalayan rivers, of which Subansiri is the most important. In fact, a particular tribe of people, the “Sonowal Kachari” were engaged only for gold washing in these rivers. Gold washing and manufacture of jewellery were two important ancient industries in Assam and gold was abundantly found in the sands of different rivers of the state. During the rule of Ahom kings gold washing was done on an elaborate scale and the state derived considerable income from it. In manufacturing Assamese jewellery large quantity of gold was used in making ornaments. F.C Hanniker in his monograph on gold and silver wares of Assam mentioned that Assamese jewellery is by no means without merit. No doubt it is very crude and precious stones are use and very well cut. But it is quaint and characteristics. The Assamese goldsmiths are not satisfied with 14 carat or even 18 carat gold and many of the Assamese ornaments have occupied a precious position among the good collection of Indian wares. The ornaments are very much beautiful to look at and are a very prestigious part of Assamese culture. These were used by both Assamese men and women during the Ahom period.

Ranthali village which is famous for “Assamese jewellery business not only in the state but also other parts of the country. This village is located approximate 8 kms away from Nagaon town near Pakhimoria development block under Dewdhar Panchayat. Ranthali village is located between 920 40/ E longitude and 260 16/ N latitude The “Ranthali” village of Nagaon district is thickly populated village. According to 2001 census, 1946 people are living in this village which is increase to 2032 person in 2011 census. Almost 90 percent of the total families are engaged in Assamese Jewellery business. Ranthali is a very small village of Nagaon district which is about 8 kms away from main centre of Nagaon town. It is one of the important place of Assam where different types of colorful Assamese jewellery are made. Jewellery making is the main occupation of the villagers of this particular village of Nagaon district.

Methods Of Preparation Of Assamese Jewellery

For preparing Assamese jewellery craftsmen are generally found to use manual method. These are very prestigious traditional ornaments of Assamese people and are mainly prepared by “Sonari” group of people of Assamese community. In the formation of this ornaments gold and silver both metal are generally used. In case of gold metal 99% pure gold (24 carets) is generally used. For using pure gold these ornaments are generally known as “Kecha Sonar Gahana” or pat Sonar Gahana. Here in the preparation process gold is generally through the help of machine to smoother up. After smoothing the gold, it is cut into required sizes and packing by white paper. After packing the pieces of gold, they are hited by the haturi and other two different types of small instruments used by the goldsmith. Then the pieces of smooth and fine plates of gold will be ready to use in the preparation of ornaments. In case of silver metal, three different types of elements are mainly prepared by silver, such “Tar”, „vissile‟, and „pat‟ which are the most important elements for the formation of Assamese jewellery. Without these three important elements, the Assamese jewellery cannot be made. From these three elements of silver, two must be used in the formation of ornaments. For joining these three elements to form a particular design, „pine‟ is generally used. „Pine‟ is a strong quality of paste which is formed the mixture of silver, tam and bronze. To enhance the quality and beauty of these Assamese jewellery items, here special colour is used which is generally known as „Mina‟. Besides these some different types of colorful stones are also used here. After pasting or using the stone and „Mina‟ through „Nuoni‟ and Kanchani, the pure gold is generally used outside the „stone‟ or „Mina‟. Some different types of colorful small size balls beads which are generally known as „Moni‟ are also used in the Assamese jewellery items. According to size, colour and quality of the balls they are known as „Bakharua moni‟, „Balmoni‟, Desimoni‟ etc. Here a very small plastic thread is used to stitch the balls and prepare the necklace.

Different types of instruments using in the preparation of the Assamese jewelery: