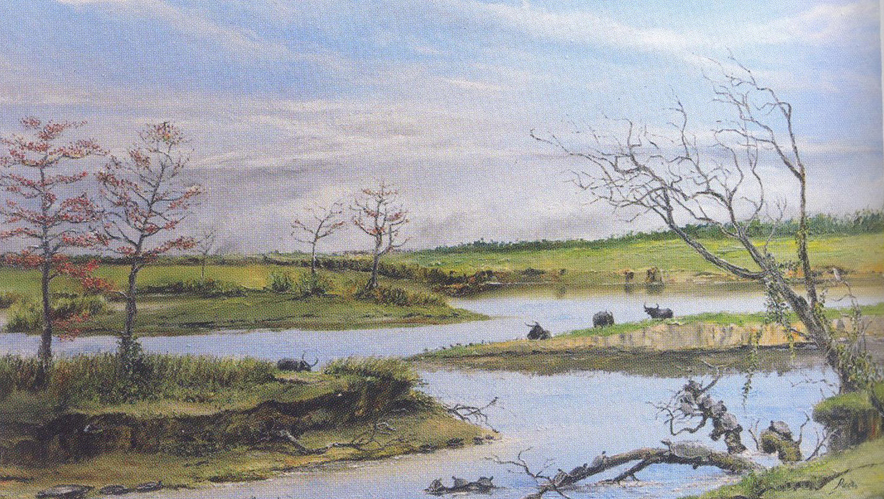 A view of Kaziranga National Park

Pranab Barua :Artist Pranab Baruah paved a new path in the contemporary art movement in Assam with a unique style of his own. His death [in February, 2002] turned out to be a dwarf before a monumental figure, and could not snatch away his national fame. Pranab Baruah, as an artist, wanted to go, forever, beyond a world where the structures of relationships between man and woman means only a living death. There are some portraits having an individual style which still inhabit that world, and there is an implicit identification of his paintings with the substance of the artist’s life, understandable in view of the way, the metaphors enacted in them, taken together, are obviously intended to exhibit in full the structures which give shape to that life. The ideas and metaphors Pranab Baruah chose are imbued with exotic or bizarre associations derived from his experience.

Pranab Baruah, a versatile artist, born in a cultured and well off family in 1935. His home, a paradise like abode by Kolong paar, the channel, which had been the constant source of inspiration for many creative artists and writers of this region. Western style in art was in his blood, and so, Pranab Baruah, instead of joining Santiniketan for the Indian approach to art, studied at JJ School of Art at Mumbai for a more western background.

The greatness of Pranab Baruah as an artist lies in the narrative quality of his portraits and use of the monochromatic colour. Another feature of his composition is that he had a tendency to divide or distort the space and form with the help of the basic geometrical shape and moreover there is close resemblance of Pranab Baruah’s portraits with Picasso’s analytical cubism. History tells us that most of the world famous artists like Picasso, Duchamp, Manray, Ben Shann, Francis Bacon, were greatly influenced by social issues. On the contrary, Pranab Baruah, the pathmaker, declined to be swayed by any sort of movement, and stressed on his personal issues which he universalised and created a peculiar style marked by his unique individualism.

‘Cactus Flower’ - is a painting by Pranab Baruah .His paintings like Whispers, Gossip, Woman under the Hat, Vision of Truth, Three Windows in Storm evoke into the mind of the viewer some curiosily to explore beneath mere colours. Pranab Baruah, though atheist in nature, draws the figures of Christ, Krishna and Ganesha which symbolise ageless metaphors. His works, both group show and solo shows were exhibited in different parts of the country like Academy of Fine Art in Kolkata (1979), Lalit Kala Akademi in New Delhi (1981), Tribeni Kala Sangam (1990) and Guwahati Art Gallary. Sanjeeb Sarkar, a celebrated critic of Bengal wrote a review in the magazine Desh, while Homen Borgohain wrote an inspiring review in the weekly paper Nilachal. His famous paintings Protikhya and Samasya were exhibited at Academy of Fine Art of Kolkata, Lalit Kala Academy of Delhi, and Birla Academy ofKolkata. A prestigious art gallery in Mumbai has also preserved some of his paintings.

Though Baruah’s paintings were basically in oil, yet he also tried water colours, ink and sketch drawing. His works donot fall foul of modernist injunctions against personality and its richness is a standing rebuke to objectivism – are buke rendered more cutting because one layer of his paintings is constituted by vivid qualities of art.

When the people of Assam in general and the people of Nagaon in particular were unaware of the art movement during the fifties and sixties, Pranab Baruah, like a torch-bearer revolutionized an art movement, setting up several art schools and organisations, and one of them is Kallol Chritrangana.

Nagaon, an Utopia for the artist, was chosen as the place from where he visualized everything. Baruah dedicated his whole life to art education, rejecting the post of the Director of Cultural Affairs, Govt. of Assam, and was given Bishnu Rabha Award in 2000 and artists' pension. But he deserved much more. 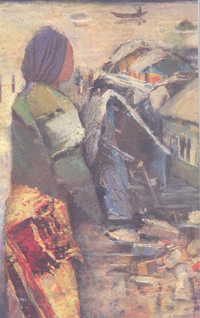 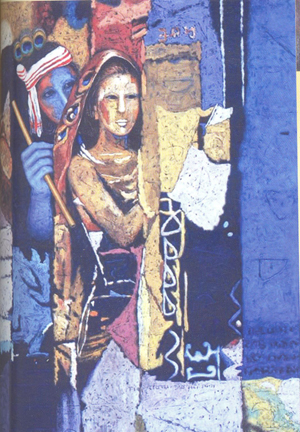